Deciding whether or not to be a parent is not an easy choice to come by, and sometimes our decision on the subject can fluctuate -- even within the same day. Other times, we are not given the choice to have biological children, but can still choose to adopt. Below is the story of a friend of mine, who wishes to remain anonymous. She wanted to share her feelings on what it's like to be uncertain about becoming a parent, and how sometimes being childless is a choice, while other times it's an unintended circumstance.

“Whenever I talk to women in their 40s or 50s who have chosen for some unarticulated reason not to be parent, they always say they have no regrets.  None.  They unequivocally and absolutely made the “right choice”. They love their friends’ kids.  They love being auntie so-and-so.  But do they really?  I’m sure for at least some it was not a choice not to have kids, more a choice not to adopt or choose some other method of becoming a parent when biology messed with “what could have been.”  For some, life took turns they weren’t expecting and the next thing they knew they were kidless and spouseless and looking for something new. Or something old.  Or just something that wasn’t offspring.  For some, maybe maternity wasn’t their strong suit and they truly knew from the day they chose their brother’s transformers over their baby doll that motherhood wasn’t for them.

But, in general, I think many people are lying.

Quite possibly to themselves and they don’t even know it.  But lying nonetheless. Some may only be lying sometimes.  On the day they’re sitting in first class, glass of champagne in hand, bound for a long awaited two-week culinary tour of Italy, they’re not lying.  They’re stoked that their excitement isn’t muted by that overwhelming guilt their friends complain about from leaving  kids with grandma and grandpa.  But in that moment when their best friend is holding a perfect, sleeping newborn and they witness true unconditional love for the first time — they might just be lying.

I bring this up because I’m one of the liars.  I’m coming to terms with it, but it’s the truth.  Most of my adult life I’ve claimed, with varying degrees of conviction, that I don’t want children.  It’s turned partners on and scared them off.  It’s upset my parents and caused fights in relationships.  But I never wanted to lead someone down a false path of assuming I wanted that American Dream. 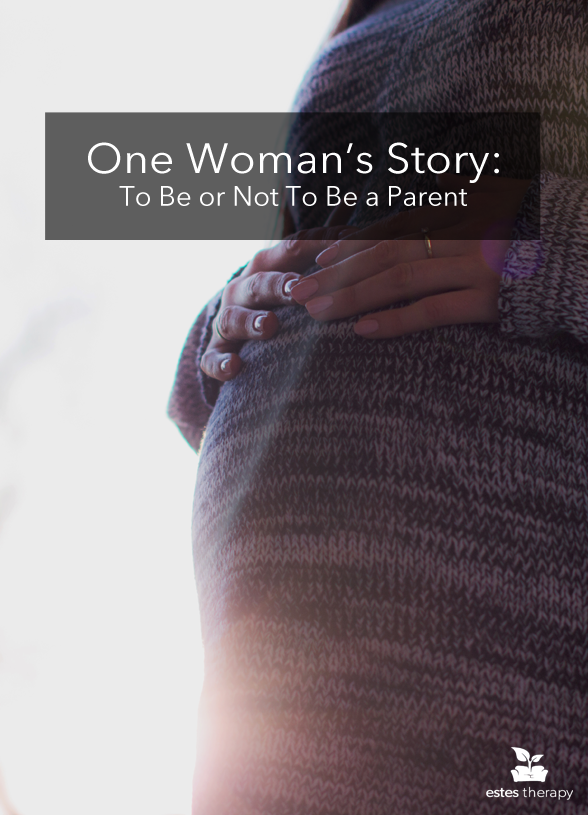 In my 20s, it was absolutely true.  I was unapologetically selfish.  I didn’t want to share my Saturday morning snoozefests with a boob-sucking parasite or argue with a spouse over whose turn it was to heat a bottle at 4 AM.  Now in my 30s, it’s true about half the time (though declining rapidly).  What is true all of the time  is that I will never have my biological child.  One that is that perfect mix of my DNA and my husband’s.  His chin, my eyes.  His propensity for logic and levelheadedness, my devil-may-care, dance in the streets personality.  That is not to say I will never have a family (one that involves the pitter-patter of little feet).  I have options.  There is adoption – an equitable compromise that involves no shared DNA.  There is egg donation – his goop, an anonymous (or not) donor’s presumably healthy egg.  But it was the introduction of these options that made me realize that I really am a liar.  When it was up to me to control the biology of my parental destiny, I had the hubris to declare myself above parenthood.

Now that the natural progression of childbearing is no longer up to me, it’s alternatively a relief and completely devastating, often in the same sentence.

For all the same reasons that most sane people are, I am terrified of procreation. Terrified of not being good enough, of passing off my special brand of loony (or worse, some foreign brand of loony) to my offspring.  I’m terrified that the choice is mine now.  I can’t feign indifference or “oops” or “if it happens it happens”.  To be a parent (or not) is now a deliberate and conscious decision I must make.  For me, for that child.  And you know what?  It’s scary as hell.  I don’t have the answer.  I don’t know what I want.  I have no disposition pushing me towards maternity, but at the same time, I crave that ability to choose the most basic of physical purpose.  I congratulate and coo and shower as my friends (intentionally or otherwise) start and grow families.  I gloat when I sleep until 10 and occasionally shed a private tear fueled by jealousy that I prefer not to admit.

To be or not to be a parent: Share your own stories in the comments if you feel comfortable!

Want to talk about where you are ready to be a parent? Make an appointment at Estes Therapy.