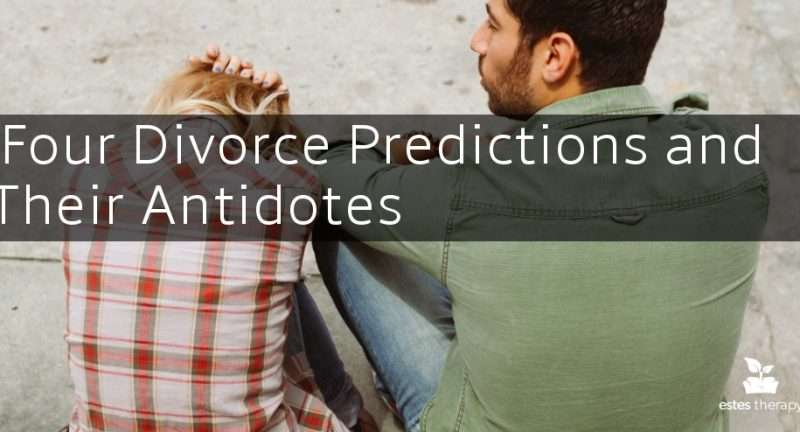 After over 40 years of research, Dr. John Gottman has seen four main predictors of divorce and unhappy relationships.

Divorce or separation doesn’t come without warning. You or your partner isn’t going to go to sleep completely happy with your relationship and then wake up the next morning and think “never mind” for no reason. So what should you be looking out for? Criticism, contempt, defensiveness, and stonewalling.

This is a very common horsemen that can show up in all relationships. Typically, it comes from a place of the speaker just wanting to be seen and heard in their pain and their perspective on an issue. Criticism is stating a complaint as a flaw in your partner’s personality, issuing blame, or a global statement. It typically starts with the word “YOU.” This can look like “You are so lazy, you never do the dishes when I ask you to.” When people hear criticism, they turn off actually hearing the message underneath it, and typically go to defensiveness- making it so their partners won’t be heard.

Try to use a complaint instead. Complaints are about one’s own experience, and the specific action they feel upset about. For the most effective complaint, start with an “I” statement to state your specific feelings. Then state the specific situation. Finally, state the positive need that you have. A positive need is what you do want, rather than what you don’t want. This can look like: “I feel frustrated when I come home from work and see the sink full of dishes. Can you please do the dishes on the nights I work late?” Return the sentiment. Ask your partner if there is something you can do on their difficult days that would make their day easier. Although in the moment it can be hard, using this format helps the listener actually hear their partners important feelings and needs.

Contempt was found in the research to be the most destructive of all. When we make a critical statement that comes from a place of “I’m better/ smarter/ kinder than you are,” it is contempt. It can take on forms such as mimicking, name calling, sarcasm, ridicule, as well as eye-rolls and other non-verbals. Although very destructive, people who use contempt are trying to be seen and heard by their partners in their pain and perspective. It can look like “Oh really? You are ‘too busy’ laying on the couch to do the dishes?” Contempt is so toxic that it actually wreaks havoc on our bodies and leaves recipients more susceptible to infectious diseases, like colds and flus. Hearing contempt typically makes people feel very attacked. This leaves them unable to listen to the important message their partners are trying to communicate- which escalates the argument.

Contempt usually arises when the friendship in the relationship is deteriorating, and partners feel unseen and unappreciated. Creating a culture of fondness and admiration in the relationship will work to mitigate this. This can include giving affirmations, appreciations, asking open ended questions, creating rituals together, and overall treating each other with respect. Try to look for what your partner is doing right instead of what they are doing wrong- and tell them this. Think of how nice it feels when your partner tells you how funny/smart/creative/etc. you are. They feel the same when you say those nice things to them. It creates a more positive and supportive atmosphere for your relationship. Getting in the habit of describing your own feelings and positive needs will help with this too. Once friendship and appreciation becomes a part of the culture within the relationship, contempt will have a harder time sneaking in.

Defensiveness is usually an attempt for people to protect themselves or to ward off a perceived attack, and so it understandably tends follow after criticism and contempt. Defensiveness can take the forms of a counter attack (“YOU didn’t do the dishes either!”) or whining. Language such as “But,” “no,” and “at least,” signal defensiveness to the listener. Defensiveness is really a form of blame, and ends up escalating conflict discussions because partners who receive defensiveness continue to feel unheard. If the relationship is in a very negative place, people will hear criticism all the time, even if it’s not being spoken- and act with defensiveness accordingly.

Accepting responsibility for at least some part of the problem is the antidote to defensiveness. Each person in an argument has a valid perception and reality. Even though it can feel tough to do in the heat of the moment, signal to your partner that you hear their pain and frustration. Take some responsibility for your part. These will work wonders to de-escalate the conflict. Language such as “I could see why you would feel that way” will validate your partner. Responding with “You’re right, I didn’t do the dishes tonight” show you taking responsibility. Phrases like “I didn’t know that X made you feel that way, I’ll work on that” help your partner feel heard.

Stonewalling is aptly named because this is what it can feel like to partners – an impenetrable stone wall. This shutting down, withdrawing, or checking out typically happens when criticism, contempt, and defensiveness have become too overwhelming and painful. Withdrawing from the interaction feels like a form of self protection. When overwhelmed by the criticisms or contempt, your heart rate will increase and you will feel anxious. This is the greatest predictor of stonewalling. This is when our body turns on fight-or-flight mode, which makes complex problem solving and listening impossible. Our bodies can’t process social interactions like they normally can. Partners on the other side of the stone wall typically feel very alone and unheard in the interaction, which can continue to escalate the conflict.

Self soothing, such as guided relaxation and breathing exercises, is the antidote to stonewalling. This will work to get your heart rate back down so you are able to stay connected in the conversation. We want you to experience your partner as a source of warmth and comfort. Take a 20 minute break from the conflict to self sooth. This will help both partners deescalate so that you both can listen and understand each other in the conversation. The key here is to respect your partner’s need for the break, and for both people to promise to return to the discussion after. Try not to ruminate about the interaction during the break, or else it will be hard to cool off. After taking some time to self soothe, both partners can come together and try the conversation again in a calmer, empathetic and more creative way.

Criticism, contempt, defensiveness, and stonewalling show up and work to keep the negative cycles in your relationship going. Every couple will fall into negative cycles every now and then, but it’s being able to identify and rectify those cycles that is key to a lasting and happy relationship.

Want to read more from Dr. John Gottman? Check out our recommended books.

Jackie has worked at The Gottman Institute in Couples Services for four years, where she received significant exposure, training, and understanding of Gottman Method Couples Therapy. She also received training in Couples in Addiction Recovery, a program designed to target the needs of couples where addiction has come into their life, and Art and Science of Love Program Educator training, aimed towards training professionals in hosting the world-renowned Art and Science of Love Workshop.