Ways to Damage Your Relationship or Marriage

John Gottman, a marriage and parenting researcher, has written about behaviors that are damaging to relationships, along with seven principles needed to make marriage work. The following are some of the habits and behaviors that Gottoman has identified as being hurtful. When you read the list, focus on any behaviors that you do within your own relationship, and avoid searching for how your partner is within the relationship. The more you are aware of your OWN behaviors, the easier it will be to stop them. 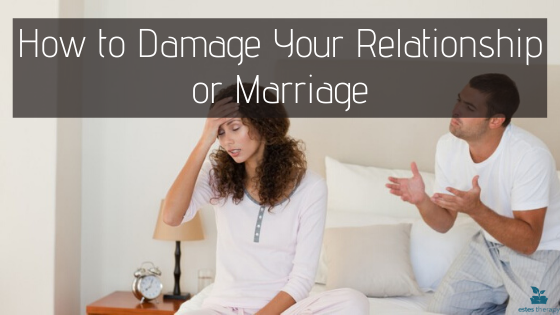 Take a look at what John Gottman says can damage your relationship:

You can predict the outcome of a conversation based on the first 3 minutes. If the conversation starts out with harsh tone of voice, negative words, criticism, or sarcasm, you are probably headed for an argument.

This means that your spouse’s negativity is so overwhelming and so sudden that it leaves you shell-shocked. This feeling is often followed by stonewalling.

Body language can be louder than words. This may include rolling eyes, arm crossing, lack of eye contact. Also, pay attention to blood pressure when feeling stressed.

This is when the couple does not attempt to repair or is unsuccessful in the repair attempts.

This includes: finding the past is difficult to remember and has faded away, memories of the negative, and forgetting the positive times together.